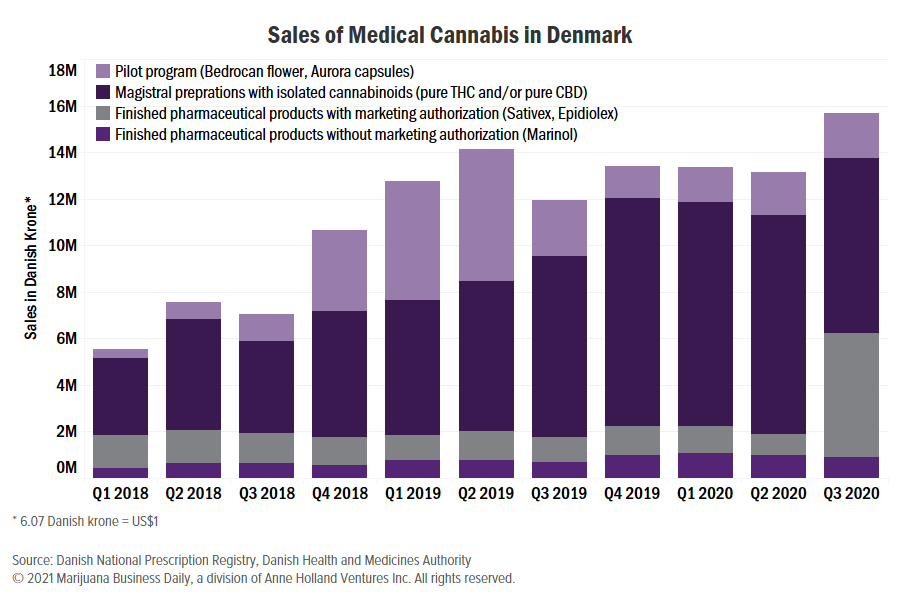 Sales of medical cannabis in Denmark posted healthy gains in the third quarter of 2020, coinciding with the launch of GW Pharmaceuticals’ cannabis drug Epidiolex.

But revenue within the country’s pilot program, which allows sales of flower and oil without marketing authorization, remains small and far from the peak seen one year ago.

The Danish market’s struggles are a reminder of why business forecasts should err on the side of caution when a country starts allowing medical cannabis sales.

Some producers, such as Canada’s Aurora Cannabis, have been forced to significantly scale back expansion plans in Denmark after severely overestimating the pilot program’s growth in these early years.

Instead of planning to capitalize on potential growth in markets that don’t actually exist yet, companies ought to pay closer attention to countries where current rules allow businesses to play in, experts say.

For example, products not part of the pilot represent the majority of Denmark’s medical cannabis sales. These include:

In the third quarter of 2020, only 12.5% of total revenue generated by medical cannabis sales came from products sold as part of the pilot program, official data shows.

That is down from early 2019, when transactions in the pilot program represented 40% of the total medical cannabis sales.

The biggest change from the previous quarter was a meaningful increase of sales in the category of finished pharmaceutical products with marketing authorization, explained by the start of GW Pharmaceuticals’ Epidiolex sales.

In the third quarter of 2020, 458 unique patients received a prescription for products included in the country’s pilot scheme.

That’s slightly more than the 408 reported in the previous quarter, according to data recently disclosed on the country’s official e-health portal.

Doctors wrote 1,154 prescriptions for products included in the scheme in the April-June period, up from the 1,038 issued during the first quarter of the year.

In 2020, only four products were available in Denmark under the experiment. Those include:

In a sign that full-spectrum capsules might be gaining momentum, Aurora sold 273 packages of capsules – each containing 100 units – to patients in the third quarter. That’s double the 135 packages sold the previous quarter.

About 10 kilograms (22 pounds) of flower was sold in the July-September period, a little lower than the previous quarter.

The pilot program started in January 2018 and enjoyed rapid growth until mid-2019, when about 1,000 patients were receiving 1,800 prescriptions per quarter.

The number of patients sharply declined in the second half of 2019 once the only full-spectrum oils available were removed from the market.

The experiment has included 2,680 patients as of the end of the third quarter of 2020.

At least four out of five patients in the pilot program have been older than 40 to date. Three out of five have been women, according to public health data.

About half the prescriptions were written to treat neuropathic pain.

As Marijuana Business Daily has previously pointed out, sales within the experiment – which include flower and full-spectrum oils products without marketing authorization – represent only a fraction of the regulated medical cannabis sales in the country.

Most sales are generated by finished pharmaceutical products or isolated cannabinoids magistral preparations that, for the most part, have been available in Denmark since before 2018 and are not part of the pilot program.

Accounting for all medical cannabis products, including those sold outside the trial program, total sales during the third quarter were about 15.7 million Danish krone, of which:

Considering all types of products, 6,130 patients received a prescription for medical cannabis at least once from January 2018 until September 2020 – most for isolated cannabinoids magistral preparations.

Alfredo Pascual can be reached at [email protected]

Where to put CBD cream for anxiety?

Can you give a puppy CBD oil?

Can You Fail A Drug Test Due To CBD?

Does CBD Cause Constipation?

CBD for Diabetes: Can It Actually Help?